Whenever you going to buy a trampoline I strongly suggest you get a trampoline that between 13 and 15 foot. I always gravitate towards pushing people towards this and if you’re new to this blog you probably don’t know that full stop however if you a couple of articles on this website you gonna know that I always recommend that type size for the majority of people. Obviously everyone circumstances a slightly different but you going to get a lot better trampoline experience previous self or your children or whoever you buying a trampoline from if you buy 15 foot trampoline. Not only that but it doesn’t cost much more to get a large trampoline. The majority of what you pay is for the initial investment. So if a trampoline costs $250 for a 10 foot version of it it might only just cost another $80 to make it 15 foot. But the difference is going to be incredible with your experience combines better you can have a lot more room its can feel like you’ve got a lot more freedom and your kids are actually going to want to use the trampoline. Where is it a go on a trampoline substandard and doesn’t bounce as good as their friends or even live up to the expectations then they are going to want to use it.

So that does bring it to a good point about the trampoline is 15 foot. That’s a good start. 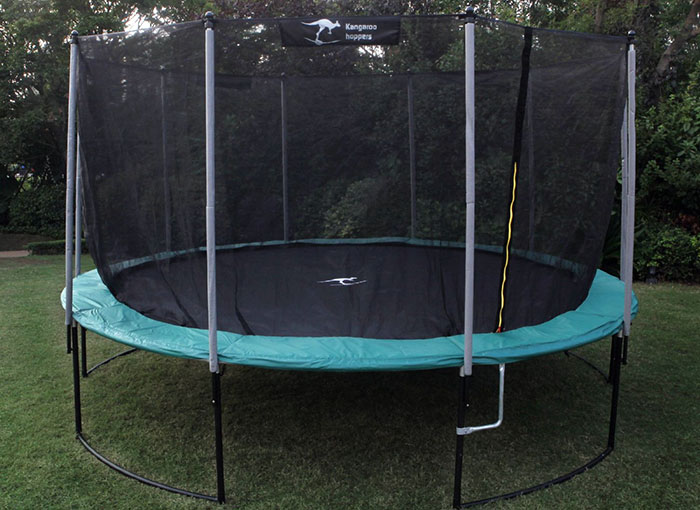 Okay so that brings us to our next point that there are specifically two types of categories that we put trampolines into one premium trampolines and the other one with the budget trampoline. The kangaroo Hoppers 15 foot trampoline definitely lies within the budget trampoline section. Now this is quite a hard concept to someone to get if then it’s bound trampoline’s order of a lot of experience round trampolines but you really get what you pay for. You might be thinking it’s simply just to she that has springs attaching it it’s going to bounce let’s get the cheapest one possible. You going to sell the experience of trampolining Shah if you do this. For most people if the buyer decent trampoline it’s one the best investments are going to make for the children’s entertainment. Mine gets used all the time and you always hear reports of people who have reviews Senate gets used every single day the children love it and obviously it’s much better for the health than playing on Xbox all the time so it’s something I like to make sure and chime push people towards buying one’s going to do justice for the experience.

So this two things that should really be aware of which the differences between premium and budget trampolines the first is the bounce and the second the safety. Premium trampolines have far better bounce and example with this trampoline the kangaroo Hoppers you can find reviews people saying that their children didn’t actually use it too much because it doesn’t bounce anywhere near as well as they would hopes or as well as their friends. Something like their acon 15 foot trampoline is going to give you the best experience for 15 foot trampoline is incredible the biggest YouTube that is dedicated trampolining recommends this trampoline as well but you do have to pay more for it but again in terms of performance and experience laws the kangaroo hopper out of the water not only that but from a safety perspective it’s much better.

A trampoline mat that is constructed to a much higher degree of quality it’s going to last a lot longer and it’s going to save you money in the long run whilst delivering a better experience definitely worth the money it’s just whether it would be outside your personal budget.

Okay so from the get go on the initial appearance of this trampoline it looks okay. In a way that it doesn’t look great I can see a few things immediately stand out as quite bad manufacturing problems. The first improper not that important is the matting and the springs. You can tell is not manufactured to a high quality it’s looks loose and it doesn’t take longer sky around the Internet to read reviews of other people send it only took a couple of months do this to degrade. That being said it’s probably one the cheapest things are trampoline to replace but you don’t Wanna be doing everything on such to set off alarm bells that something is wrong with this trampoline. The next thing a nice immediately is how thin the support poles look for the enclosure. Don’t be fooled into thinking that the form is the thickness of the support poles actually quite thin. In fact the entire frame is quite thin. Not something I’m particularly happy when I see a trampoline you want a bit thicker in my opinion.

The weather promotes the trampoline and the details are talk about is pretty standard it’s going to say that it’s galvanised steel weather resistant ultraviolet radiation resistant so it can survive through weather conditions special rust technology for the springs and that’s really standard type of top for a trampoline so don’t get too hung up are excited about this every trampoline states they have these features. It’s definitely a budget trampoline through and through and although you going to have some people who are very happy with the trampoline assay definitely running a bit more the risk of getting disappointed by either the experience or it’s durability both of which are gonna cost you more in the long run.

like most budget trampolines you going to find very mixed reviews this trampoline a lot people set up have a kid bouncing it and sets fantastic the majority of people don’t know what good trampoline is like so the going to be happy with anything that looks like it does the trick. However if you took more same children that family and give them a premium trampoline like the Skybound Stratos 15 foot trampoline they will immediately be able to tell the difference and would want to go back. But you do have the people who are quite happy with it and you may be happy yourself but also get quite a few people who realise this isn’t the kind standard you want to be delivering.

As reports of people send this trampoline breaks a few months and it’s not really that surprising but there’s also people who say it’s lasted years and is provided countless hours of fun so it’s very mixed reviews.

the kangaroo Hoppers 15 foot trampoline is almost every measurable variable of budget trampoline. Its average, honestly may be a little bit below average. It’s not absolutely tragic and it’s not a guaranteed death trap there are far worse trampolines out there. But at the same not this far better trampolines out there to. I seriously consider putting a little bit more money into your budget and getting one the three premium 15 foot trampolines. If you really unwilling to spend any extra on a trampoline I think that’s a bit of a shame are you going to be selling yourself short of an amazing experience you can look at another budget trampoline which to privately honest probably outperforms in every single way. A better budget trampoline and something you should seriously consider is the skywalker 15 ft trampoline